The ThinkWise Impact of Team Performance Survey collected the thoughts of more than 100 senior executives from organizations across America who shared their experience of building high-performing teams and the overall impact teams have on a company’s success.

We asked leaders about the performance realities of their teams, to define the characteristics of high-performing teams and to provide insights into how their teams are in fact performing. Our team aggregated and analyzed the leadership insights. In this article we focus on the 5 team performance realities that surfaced from the survey.
5 Team Performance Realities
1. There is room for improvement
A majority of senior executives (59 percent) believe their internal team is underperforming. Respondents who identify themselves as “team leaders” are slightly more critical of their team performance (62 percent rate them as underperforming), while respondents who self-identify as “team members” are marginally more optimistic (55 percent rate their team poorly).
CHART: 6 in 10 business leaders (59 percent) do not believe their team is achieving its potential

CHART: Team performing at full potential: by size of organization (number of employees) 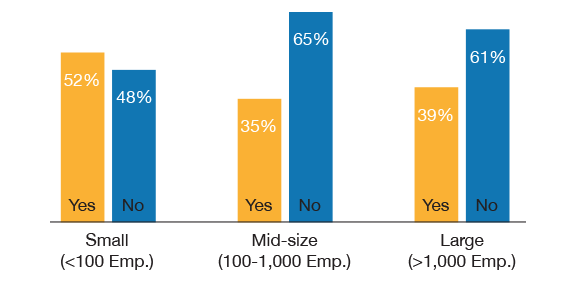 3. Team size is important
There is also a correlation between the size of the immediate team a business leader participates in and how effective they believe that team to be. According to Amazon CEO Jeff Bezos, “If a team couldn’t be fed with two pizzas, it was too big.” While 50 percent of respondents on a small team (fewer than 10 people) believe it is underperforming, that jumps to 64 percent when the business leader’s immediate team is 10-50 people, and an incredible 86 percent for teams of 50 or more. 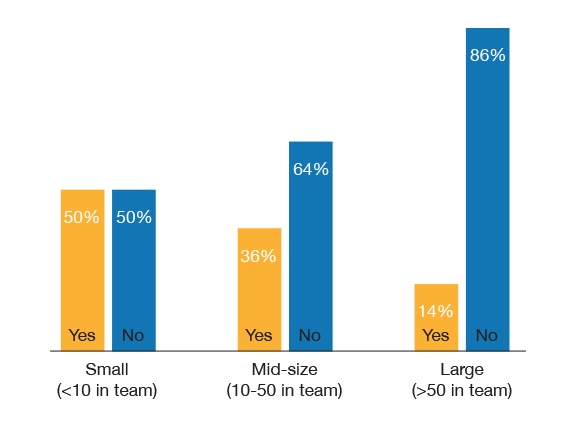 4. The way teams are formed matters
Senior executives believe the way a team is built plays a significant role in the team’s ability to perform to its potential. When asked how their teams are currently formed, a majority of business leaders (51 percent) said the role or function determined which people were recruited, while only 11 percent said people were able to self-select, and 41 percent use a combination of methods.

CHART: Only one in 10 senior executives form teams based on inviting employees to self-select

5. Self-selected teams excel
However, when senior executives were asked which approach generated the best-performing teams, nearly two-thirds (63 percent) identified self-selection. This leads to an obvious question: If self-selecting teams are known by senior executives to create high-performing results, why do only one in 10 (11 percent) currently use this approach? The experience of ThinkWise across a range of industries suggests that many senior executives lack sufficient performance data on available talent to provide top performers with the opportunity to self-select.

A large majority (86 percent) of respondents believe they have clearly defined leaders within their teams. This reinforces ThinkWise’s industry experience that confirms appointing leaders based on their previous leadership role or job title contributes less to team performance than how the leader and their previous team performed (using performance metrics). It’s worth noting the creative ways self-selection can lead to corporate innovation and success. Many tech industry hack-a-thons are built on the principle of self-selecting into teams. For example, Atlassian ShipIt Days are legendary for their quick, creative results based on small teams that are passionate about an idea.

Team Performance - What Gets Measured Gets Managed

The Impact of Team Performance - Data to Make Improvements

In the modern workplace, there are a number of factors conspiring against effective teamwork....
Read More

The Eight Dimensions of High-Performing Teams